Yesterday, Prime Minister Abe announced a plan to declare the State of Emergency for One Month (8 April – 6 May 2020) on today, 7 April 2020 for following prefectures:

We cannot identify the source for about 90% of cases.

My office has decided to work from home today and tomorrow.

This declaration is still requesting bases for self-restraint and doesn’t have any legal enforcement such as an arrest or fine.

Essential services will continue to operate.

We can still go out freely to supermarkets, convenient stores, drug stores, even office as need it.

I don’t have any Corona Tsukare (Corona Depression) because I’ve been commuting office every weekdays and I also had few Corona Sokai (Corona Evacuations) on weekends to enjoy fresh air when premises in Tokyo closed for weekends.

Events for Ohanami (Sakura viewing) are cancelled not to create the cluster.

I don’t feel suffocated by Jishuku (self-restrain) or no social life (gyms have been closed, flower arrangement classes have been cancelled/rescheduled, of course no dinner/lunch appointments, etc).

However, I’ve been feeling uncomfortable commuting to office by taking public transportation, subway.

These trains/subways cross other state of emergency prectures (states) such as Kanagawa (Yokohama), Chiba and Saitama.

I won’t have enough distance among other passengers.

It’s not crowded as rush hour train but we are about 50 cm apart or even next each other if I take a seat. (Ooops, I didn’t think of this).

And they are all strangers.

Do we need to take a risk…?

I expressed my worries to my boss because my job can be conducted at home.

Though the declaration of the state of emergency is effective 8 April 2020, the situation is serious now.

I’m happy that I’m free from the stress of catching public transportation today and tomorrow.

I’ve been cheering me up by putting springy nail colours.

Walk in a park with Choco for his walk and Ohanami.

I woke up as usual.

Since I can save commuting time, I took a bath to increase my body temperature to enhance immune system.

My father gave me a voucher for Starbucks which validated till 13 April 2020.

I went to Starbucks last weekend but three Starbucks that I visited were closed.

I believe Starbucks might extend the validation date, but I was hesitated to go through the process or even to request for it.

Starbucks was opened yesterday so I bought a French Roast Coffee beans.

I received complementary drink, Kenya and sample of Columbia.

I brewed Columbia and I should start working. hahaha

First I went to Utsunomiya, Tochigi.

This town is known for Gyoza (fried Chinese dumpling).

In fact, this is my first time to try Utsunomiya Gyoza at Utsunomiya.

There is Gyoza Dori (Gyoza Street).

There are many Gyoza specialized shops and Ramen (Japanized Chinese style noodle) and Gyoza restaurants.

The lamp is also in shape of Gyoza.

I queued and had my Gyoza at Goku, Gyoza Dori, Utsunomiya, Tochigi.

Then proceeded to Nikko, Tochigi.

Today, there is a lift to go down to watch Kegon no Taki in front of it.

It’s very cold there and we can still see some snow.

We drove by Chuzenji-ko (Chuzenji Lake) and enjoyed the view from window.

Recently, we enjoyed warm temperature and suddenly its temperature dropped; therefore, we could see some steam from lake which makes lake look more scenic and mysterious.

We drove through woods on the way to Oku-Nikko, also very scenic.

There is another lake, Yuko (Yu Lake) at the entrance of Oku-Nikko area.

We can stay this nice Washitsu (Japanese style room) together with Choco.

I went to dip in onsen (hot spring) before dinner.

There are two sections: Lower (bigger) and Upper (smaller).

Both equipped with indoor and outdoor/open-air bath.

It’s cold there; so that dipping in Onsen felt really nice.

I became thirsty after dipping in onsen so I enjoyed drinking cold Wakimizu (spring water).

After getting some rest, we had dinner with local sake made for Oki-Nikko Kogen Hotel.

Next morning, I woke up with a surprise.

According to weather forecast, it predicted snow in Kanto region.

However, in few days, we will welcome April – Spring.

There could be some snow but I didn’t expect it to be thick.

I became panic because I came with normal tyres, not snow tyres.

To calm myself down, I went for morning dip.

It was still early and there were no one.

I supposed not to take any photos at the bath, but it was so romantic.

Quickly got ready and went to breakfast.

There are many varieties of food and there is an egg and bacons in the pot.

Continued monitoring snow and consulted hotel staffs who are local; well, I had to make a hard decision – abundant my car.

I think we made a wise decision because snow is thick and we surely could not drive through these windy roads: Irohazaka.

Then Took train, Spacia, back to Asakusa, Tokyo.

Choco behaved his best on train.

I had a rich vanilla ice cream on the train while looking at these sceneries.

Therefore, I don’t have any plan for socializing or fun at this moment.

I try to cheer me up by doing self nail, going to spa,

And wearing springy coloured make up to cheer me up.

Choco also had his spa and hair cut today.

However, I doubt he enjoyed it by looking at him. hahaha

I’m a member of free CHANEL mailing list so that I received new or limited edition of CHANEL cosmetics which are launched today.

Earlier I made a call to reserve some eyeshadows – Les 4 Ombres and lip pallet that these are even in Camellia shape.

There are few more new or limited edition that I could not refuse such as eyeshadow gross, lip colour and nail.

Now I have sufficient collection of colour to refrain myself from buying…. I believe. Ahaha

I’m not feeling well for nearly a month now.

I start using these to comfort and protect me from flu.

I have sensitive skins so I don’t like to wear a mask.

However, it prevents me from virus and I really need to avoid virus because I’ve been continuously catching it.

First I was diagnosed virus flu followed by virus gastroenteritis.

To my surprise, it doesn’t hurt my ear nor damaging my skin.; the mask has improved I guess.

Some masks are designed face to look smaller.

Looking at my condition, wearing mask will become my daily routine.

I bought a box of mask which has three layers of filter to block house dust, pollen and PM 2.5.

These are in individual pack which allows me to carry one extra in case I need to change it. 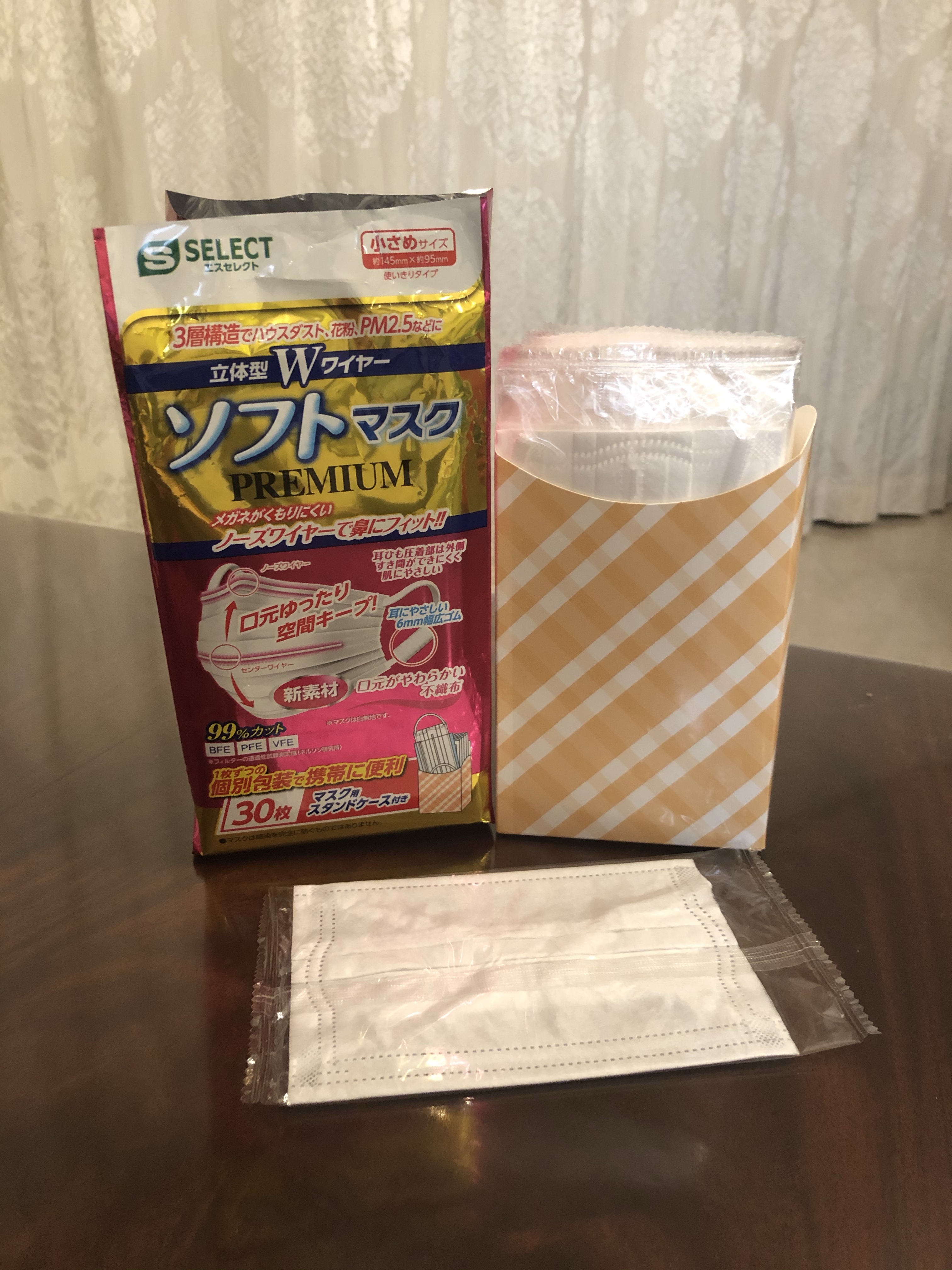 Ryukakusan is name of product as well as company name.

My friend recommended me their original powdered herbal medicines for throat.

According to her, she takes it whenever she feels any irritation at the throat.

I tried it for the first time and I agree it works directly and more effectively.

I have never shown interest in this traditional product which has been aiding throat for 200 years.

I didn’t even know the drugstore sells this traditional medicated powder. hahaha 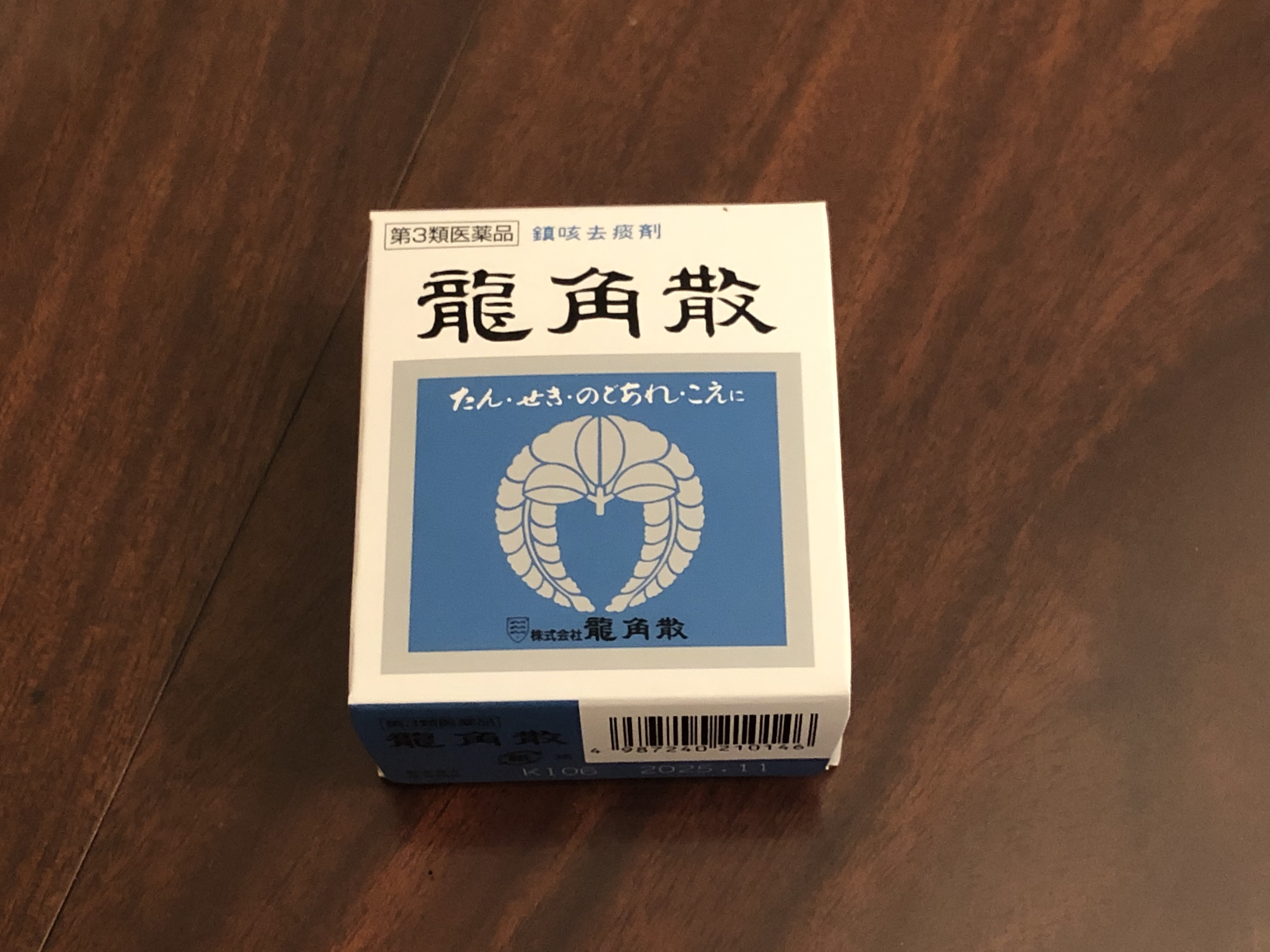 I bought the smallest size (20 g) for trial and also to carry it if effective. 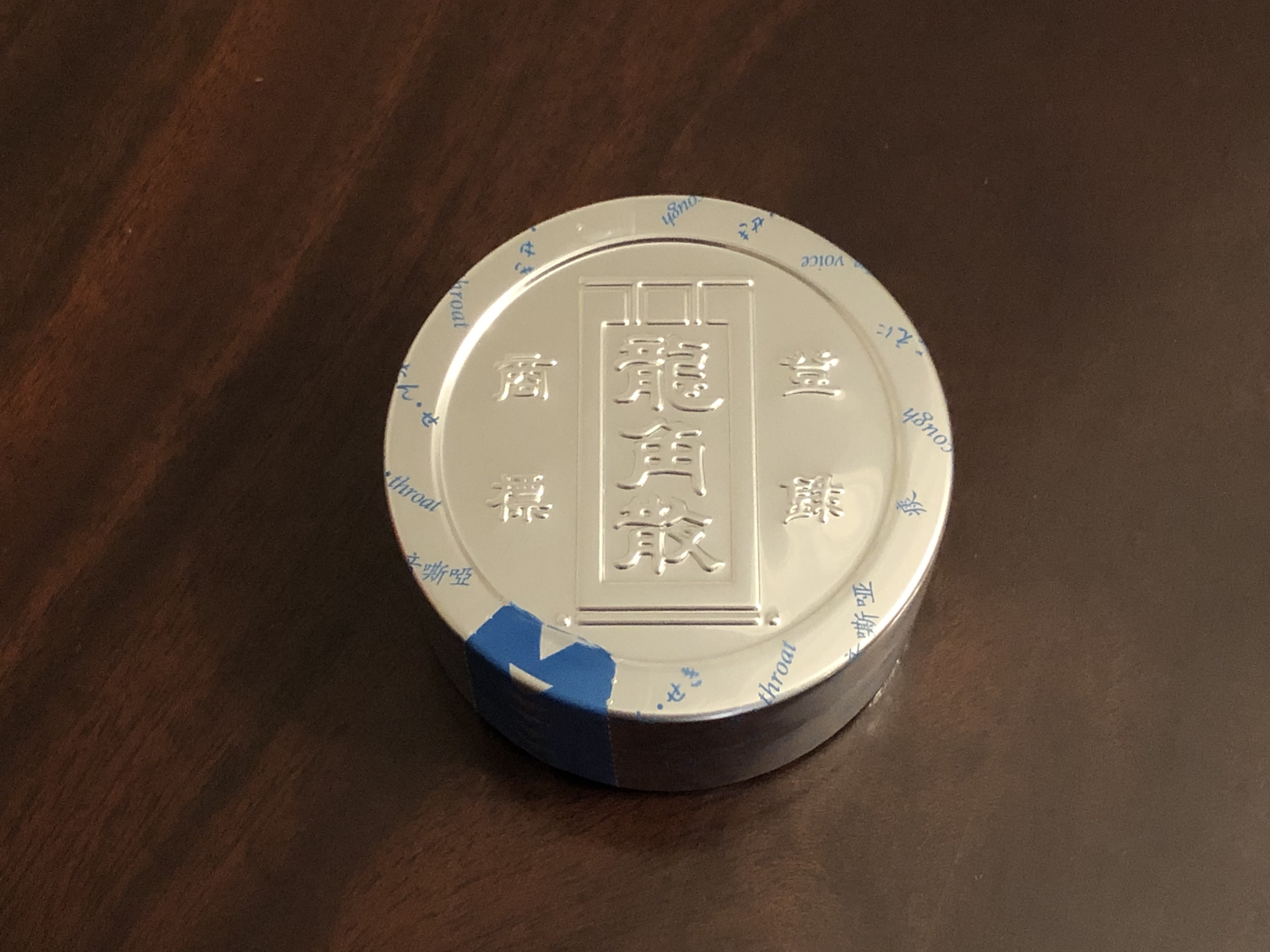 It so cute that it contains a small spoon. 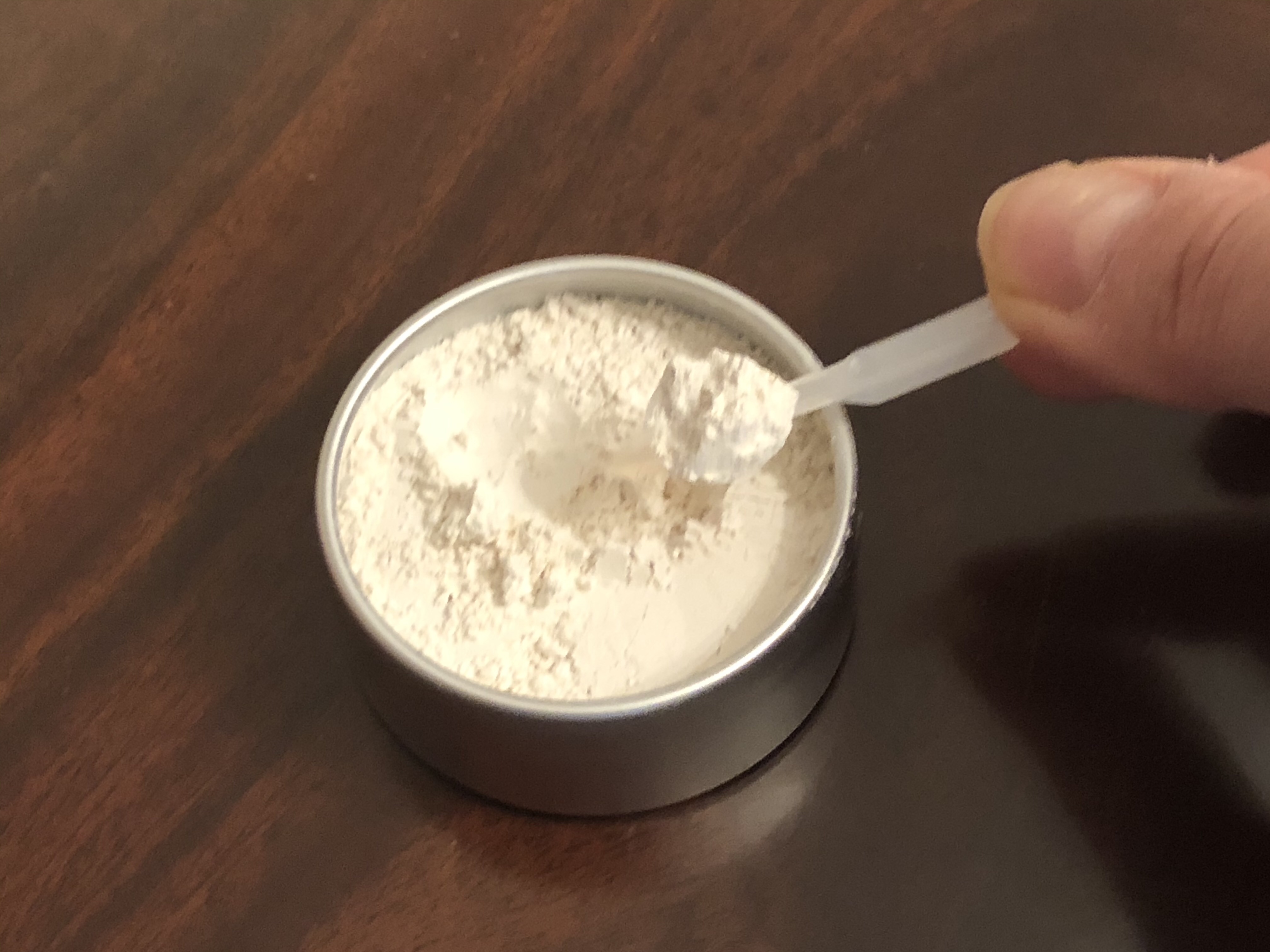 And my spa beautician made and gave me lavender body milk lotion.

According to her, lavender has sanitation effect.

So sweet of her to add lavender essence to body lotion.

Yes, when I felt worse, I should have massage my body to increase blood flow to fight back virus. 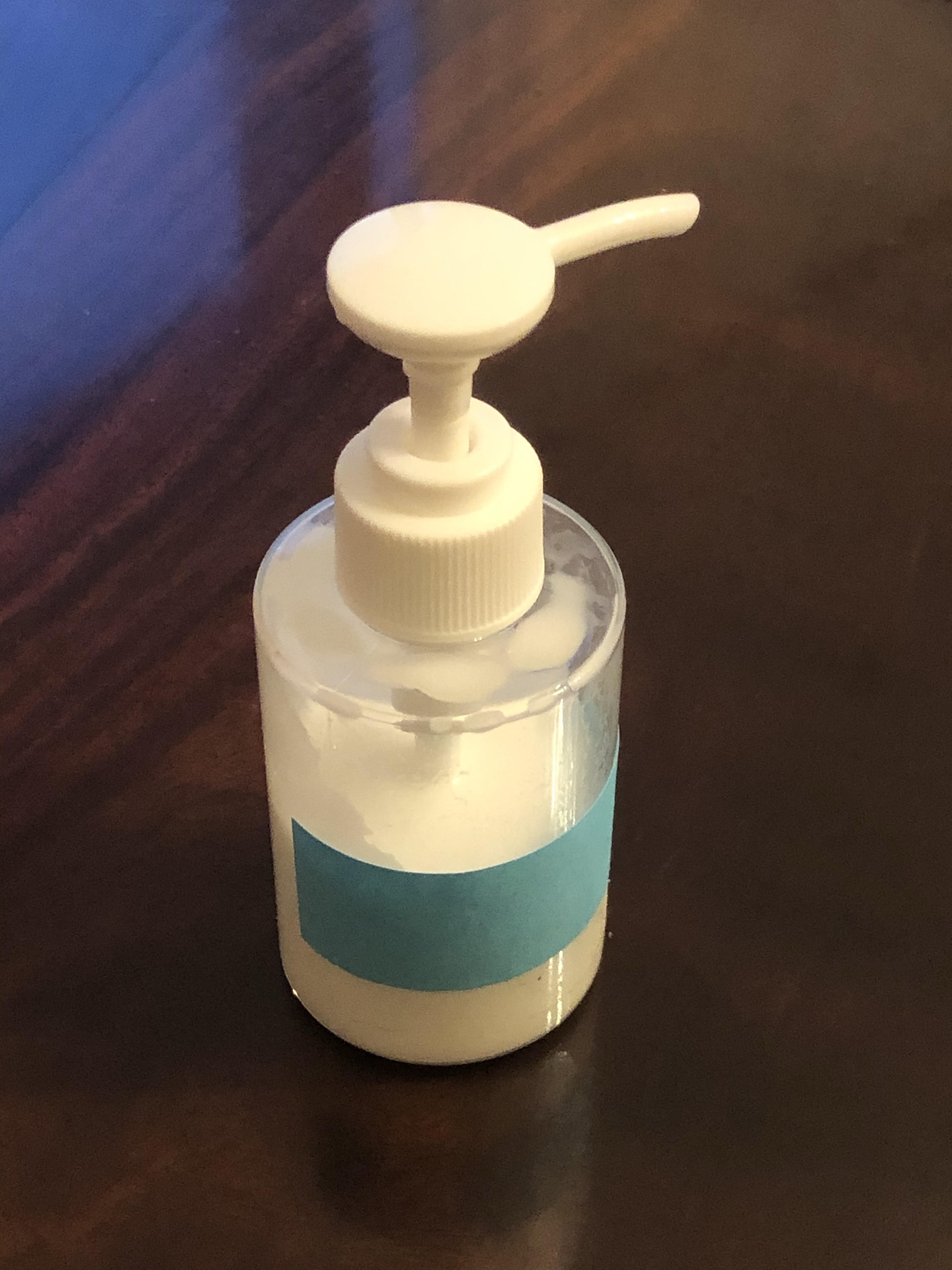 And lastly, I bought this Egyptian mint essential oil when I visited Egypt last year knowing my throat is weak.

I should burn Egyptian mint oil with Egyptian aroma burner to comfort my throat. 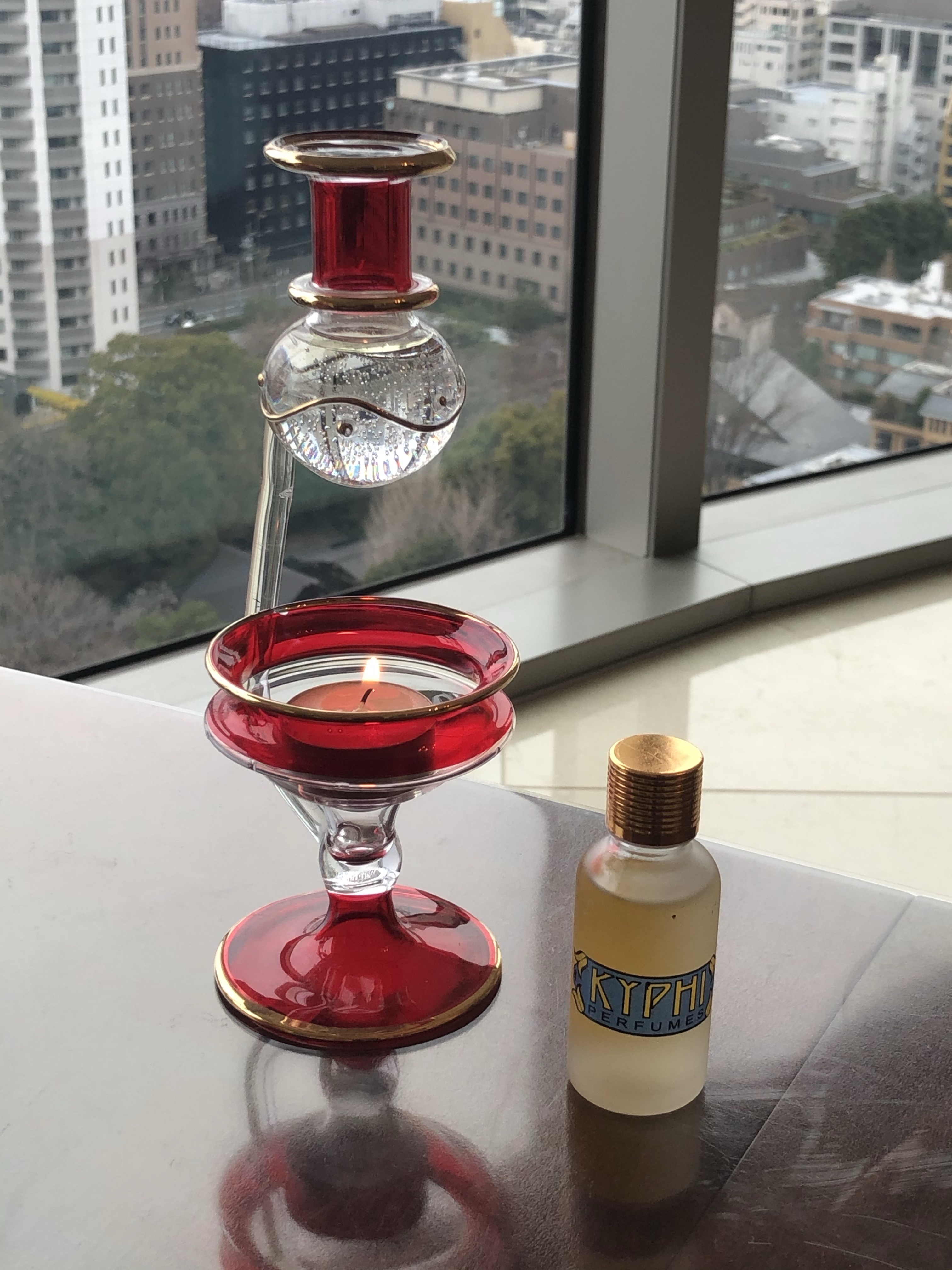 I should practice all these to get better or even not to get sick!

It is birthday of Ms. May Ushiyama, the founder of my beauty salon – Hollywood Beauty Salon.

I went to spa today and received one stem of rose.

The company organized the event on the 7th Floor so that I paid a visit.

I was welcomed with a plate of high tea and received a goody bag with spa’s tabloids, memo pad and May Ushiyama’s book titled Road to Happiness.

Her beauticians still respects her and highly talk about her.

According to the introduction, she describes her philosophy to become happy.

She was dynamic so I should be able to learn something from her/this book. 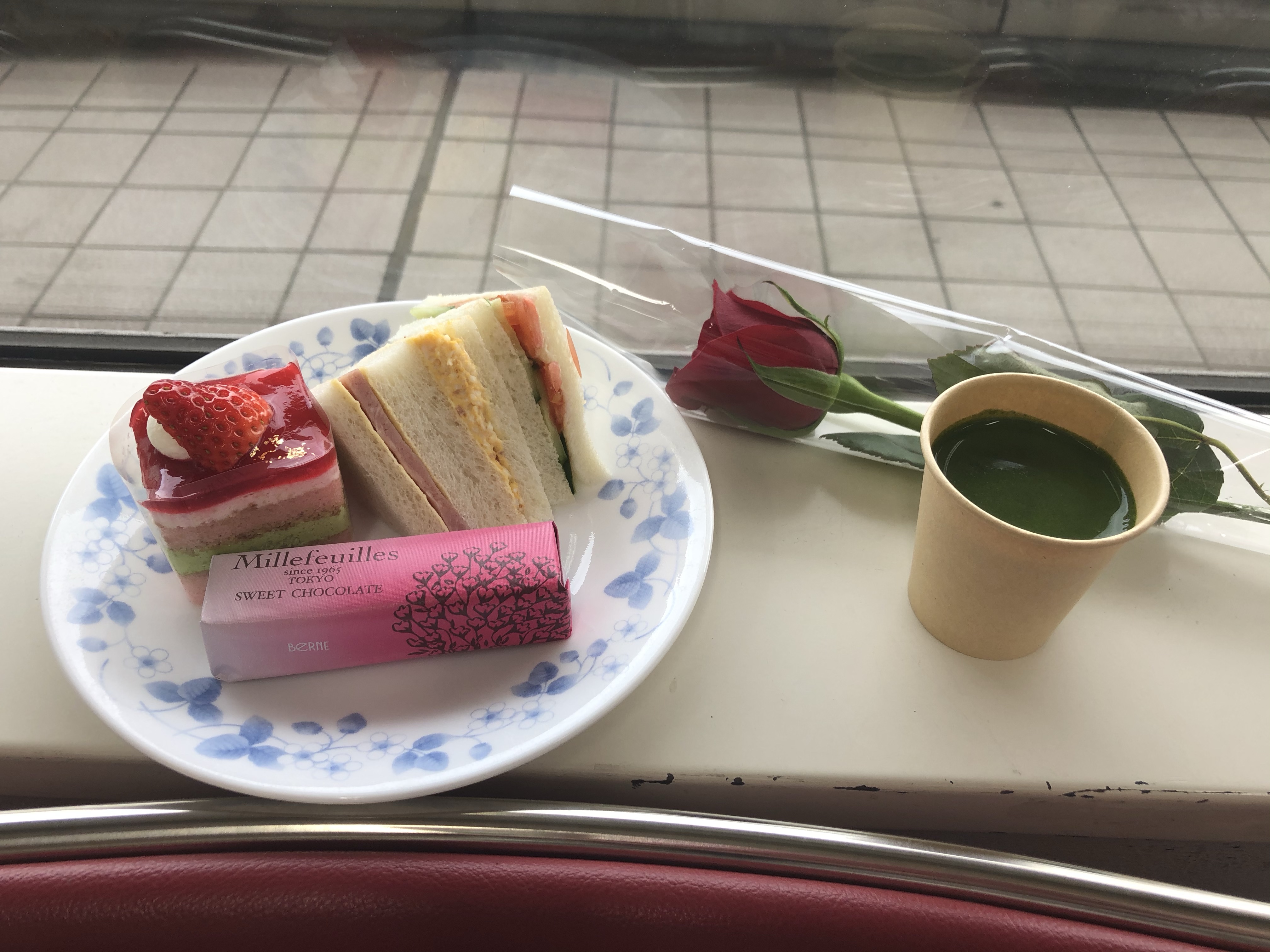 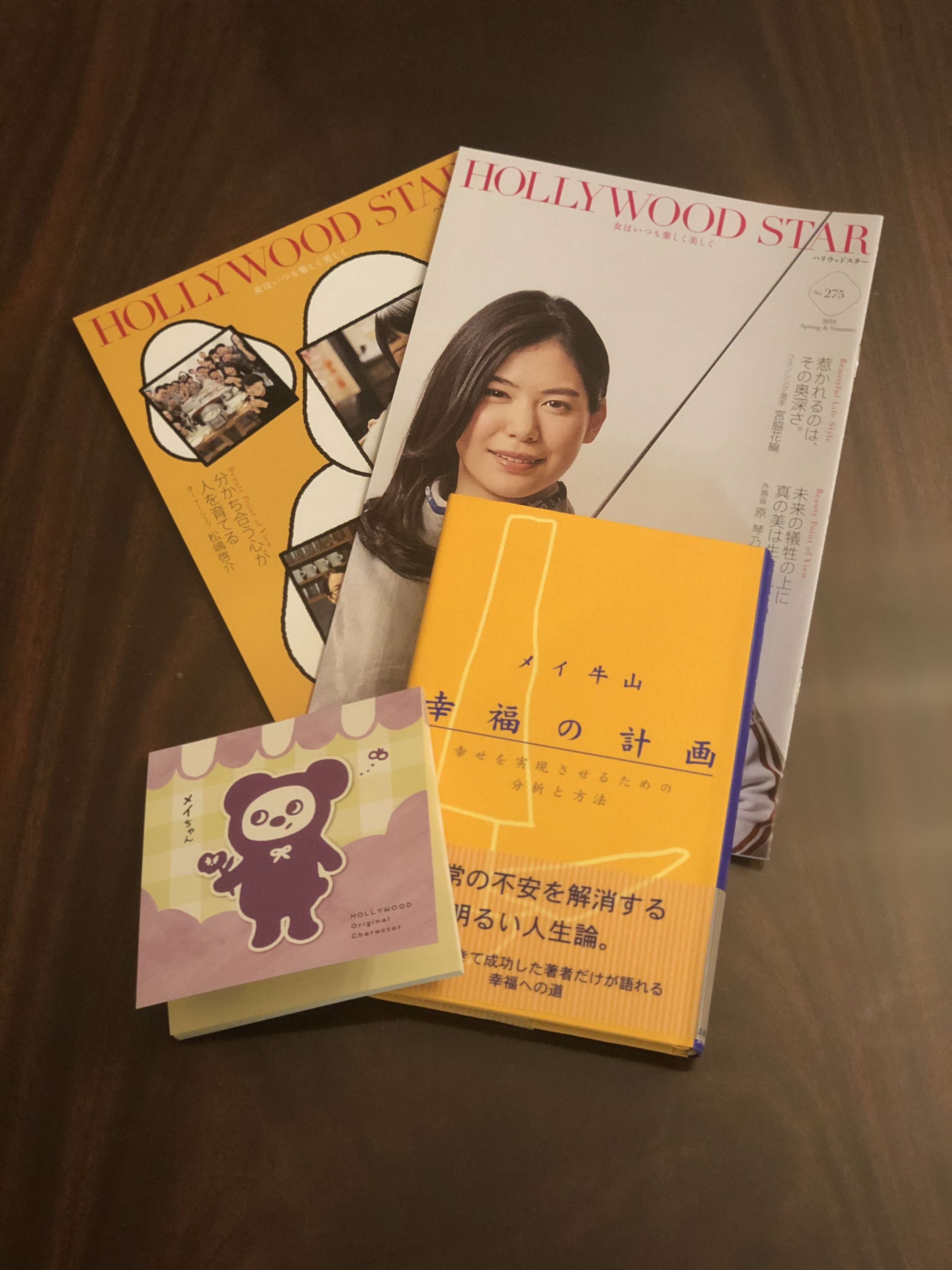 I was down for flu for over two weeks.

I had no motivation to do anything including cooking proper food.

Today I would like to introduce Nagaiki Miso – direct translation Miso for Long Life but it is actually Super Miso for health.

This formula is innovated by Dr Hiroyuki Kobayashi.

It’s all explained in his book including functions of each ingredients and recipes. 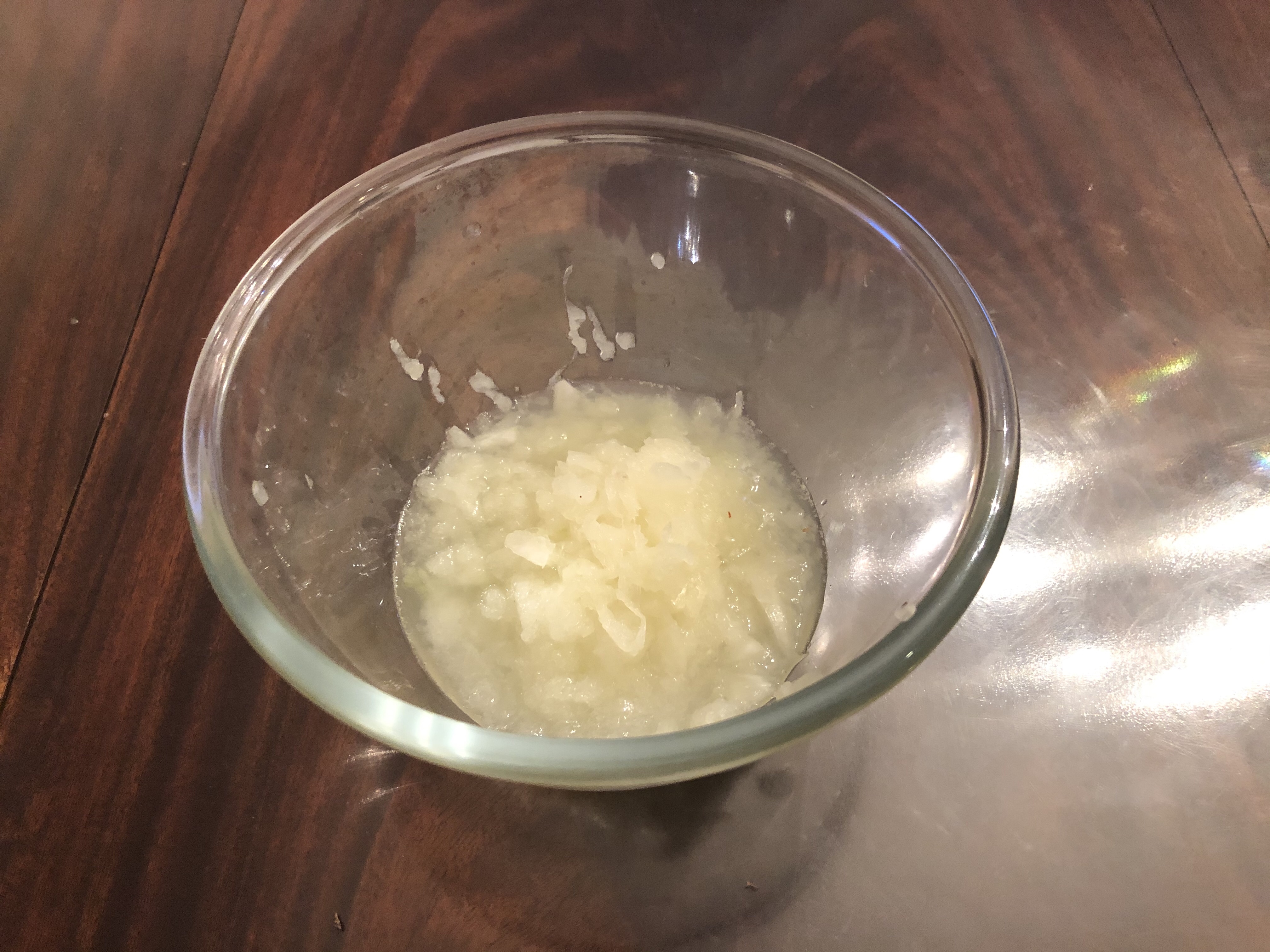 And freeze it in cube using ice cube maker with a cover.

I use one cube to cook super miso soup (150 cc) with ingredients that I want to cook with at the time such as Negi (leek), Tofu, ninjin (Carrots), buta (Pork) or/and many more combination.

I shall continue drinking Super Miso Soup to keep myself healthy!

I went to clinic and was informed I’m having a flue not influenza. 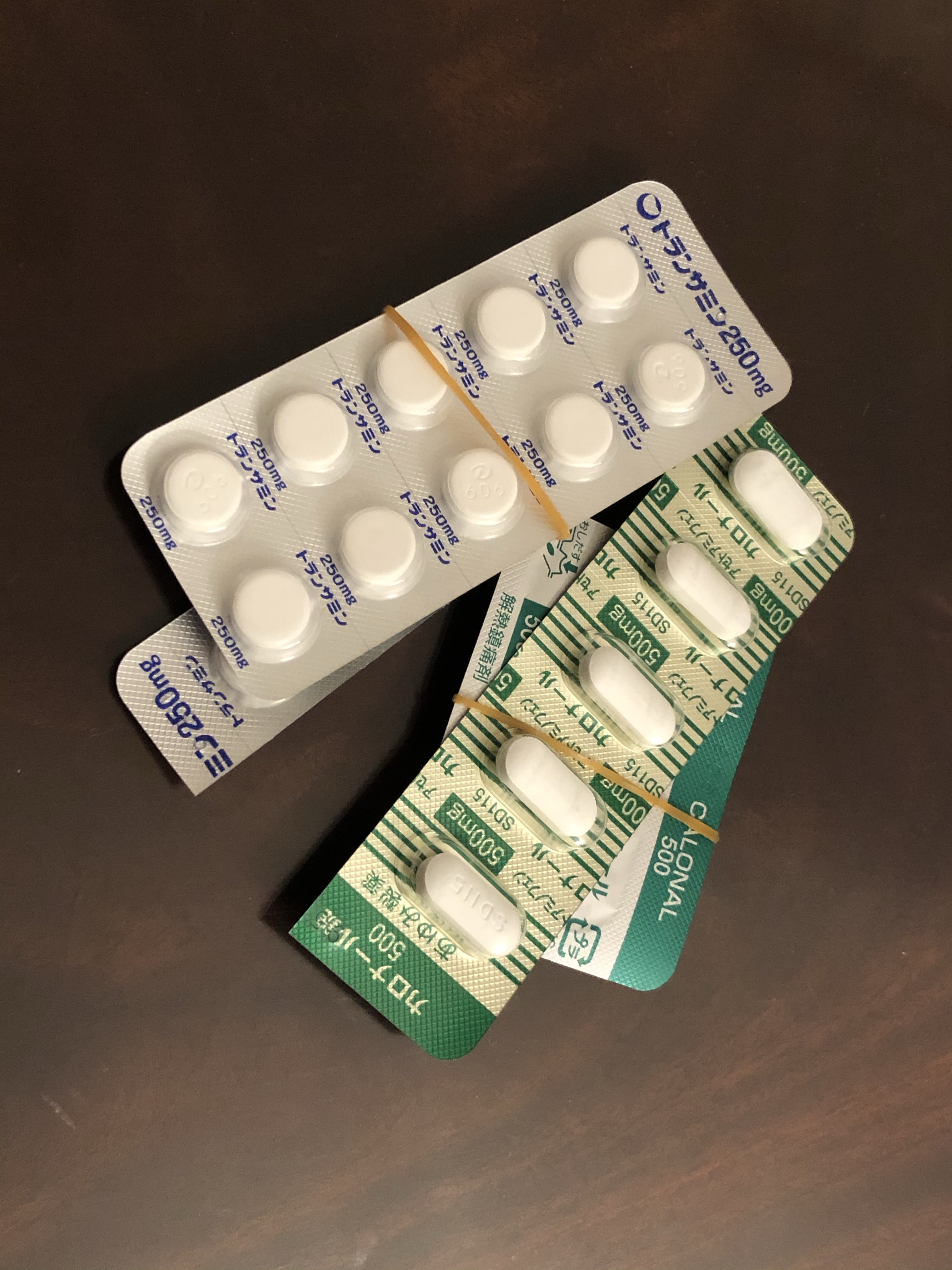 I started feeling better; therefore, I went to Takashimaya Nihonbashi Main Store to collect reserved cosmetics: Spring Summer 2020 Collection which I need to collect them by 9 January 2020.

I also asked beautician to try new colour on me.

I ended up buying more….

I will try new look on me for coming Spring and Summer!

I have wavy hair but not in stylish way, more like damaged hair look.

Therefore, I either use straight iron to straighten my hair or hot curlers to curl my hair.

To maintain these look, I use Aujua (in pink bottle) for silky straight hair and Ann (in blue bottle) for lasting curls.